As we have mentioned before, carbon (C) is essential for plants, as for all living things. The main source of carbon for plants is carbon dioxide (CO2).

Terrestrial and aquatic plants with emerged or floating leaves usually absorb sufficient amounts of CO2 from the air with their leaves. The average concentration of CO2 in the air is currently 0.039 vol%. 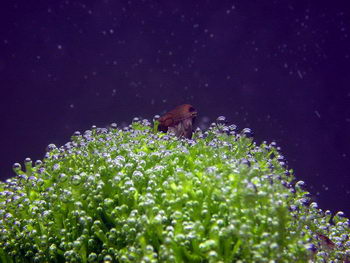 However, things are completely different below the waterline: In natural water bodies as well as in aquariums, a low supply of CO2 is one of the main limiting factors for plant growth. Not because carbon dioxide has a lower concentration in water than in air (indeed its concentration is around threefold in many natural waterbodies), but because gases dissolved in water diffuse around 10,000 times more slowly than in air. This is the physical reason why it takes far longer to absorb CO2 (as well as oxygen) from water, which is also one of the factors that make it impossible for terrestrial plants to survive under water for a longer time. Submerged plants, however, have adapted to this fact and have optimised their CO2 intake in their natural habitats. Many species can also make use of hydrogenous carbonate as an alternative source of carbon. In nature, the aquatic flora is especially lush where there is a high concentration of carbon dioxide, e.g. in places where groundwater is discharged in lakes or in spring brooks.

In planted tanks, the targeted fertilization with CO2 has only come up relatively late. A certain amount of carbon dioxide is created in an aquarium due to the respiration of the organisms inside respectively when organic matter degrades, and fishkeepers were usually busy keeping CO2 levels as low as possible in order to prevent it from hindering the oxygen uptake of the fish, and expelled it with the help of air stones. In practise, however, it showed that in well-lit tanks the plants use all the carbon dioxide generated naturally as long as the lights are on, and that a lack of CO2 is one of the main reasons for poor plant growth. Carbon dioxide concentrations of 20-30 mg/l are harmless for fish and other animals kept in an aquarium, but of especial benefit for the plants.

It may be possible to maintain a planted tank without the addition of CO2, however, there are certain requirements for that: low to moderate lighting and a choice of plants with low CO2 requirements, like e.g. Cryptocorynes, Java fern, Java moss, Anubias, Vallisnerias, Sagittaria subulata or Hygrophila polysperma. In tanks of this kind the controversely discussed "midday lighting break" makes sense: a four-hour break in the daily lighting time, during which the CO2 content regenerates somewhat so the plants are provided with it during the second half of the day, too. 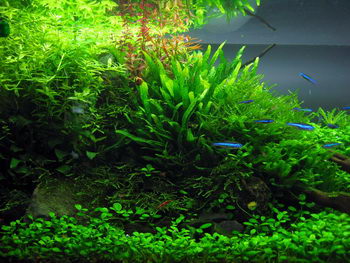 The CO2 supply always has to be considered together with the other growth factors. Increasing light and nutrient supplies will raise the amount of CO2 the plants require.

CO2 fertilization has widened the possibilities for planted tank keepers significantly. For several plant species with higher demands, the addition of CO2 is a prerequisite, however, it is also beneficial to plant species that are easier to keep, increases their growth rates and improves their health, looks and colouration. Strong lighting is not only necessary for light-loving plants but is in itself a decorative factor - and makes the addition of CO2 a must.

"Bio CO2", i.e. carbon dioxide generated by the fermentation of a sugar solution by yeast, is an easy and low-price way of fertilizing smaller tanks with CO2. A CO2 fertilizing system with pressured gas may come at a higher price at first, however, it possesses many advantages in the long run: a pressure valve for exact dosage, a long useful life, the possibility to add a higher amount of CO2, and it can be switched off overnight.

A good current in the tank helps the plants absorb CO2 and nutrients and may be created or improved by the use of circulation pumps. It is highly recommendable to switch off the CO2 supply overnight, as plants do not use any carbon dioxide for photosynthesis when it is dark, but give it off during respiration, like animals do, too.

There are different ways to add CO2 to a tank. Smaller aquariums or smaller amounts of CO2 may be brought into the tank by a so-called Paffrath-type cup. However, various reactors, diffusors and atomisers are also available. Especially efficient and especially recommendable for large tanks are inline diffusors and glass diffusors.

Carbon dioxide is only one of several forms of inorganic carbon dissolved in water (DIC = "dissolved inorganic carbon"). It forms a chemically balanced system with water, H+ and OH- ions, carbonic acid (H2CO3), hydrogenous carbonate ions (HCO3-) and carbonate ions (CO32-). The concentration of CO2 is thus dependent on the pH value and the carbonate hardness. The higher the carbonate hardness of the water, the stronger it is buffered against variantions of the pH value and CO2 levels. Falling CO2 levels are linked to a rising pH value.

As we have mentioned before, various aquatic plant species can use hydrogenous carbonate as a source of carbon when the levels of free CO2 are insufficient. A visible sign for this is the so-called "biogenous decalcification": lime (CaCO3) is precipitated on the upper side of the leaves. These greyish white, granular, crumbly lime crusts are often found on submerged plants in nature, but also on aquarium plants like Vallisnerias, Waterweed or Echinodorus. They can look very ugly and are removed by an additional fertilization with CO2.