The first fertilizers especially designed for aquarium plants that were available in the trade were iron fertilizers, which demonstrates the importance of iron and the frequency of iron deficiencies in waterplants. Of all micronutrients, iron is used in the largest quantities, some authors even count it among the macronutritive elements. 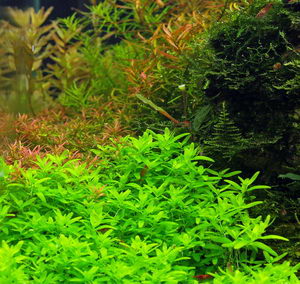 This metal is a co-factor of many enzymes, and as it easily changes from its oxidation stages +2 to +3 and vice versa. Its main function is the transfer of electrons in redox cells. For example, iron is a part of the cytochromes, which perform their function in cellular respiration in the mitochondria and, during photosynthesis, in the chloroplasts. As iron plays a vital role in many enzymatic reactions of chlorophyll synthesis, an iron deficiency causes the chlorophyll production to decrease, which typically leads to an iron chlorosis. A symptom of this is yellow to whiteish leaf tissue between the leaf nerves, which always stay green at first. First, the youngest leaves on the shoot tips are afflicted, as iron is relatively immobile within the plant. These chloroses can also be a symptom of manganese deficiency, though.

There is often a large amount of iron in natural terrestrial and aquatic habitats, however, the major part of it is present in almost insoluble forms, which plants are not able to utilise, like iron hydroxides and iron phosphate. Free iron ions that can be absorbed by plants (Fe2+, Fe3+) are only found in trace amounts. Plants have developed two different strategies for iron uptake: 1) they acidise the soil by releasing protons (H+ ions), thus increasing the solubility of Fe3+, reduce Fe3+ to Fe2+ on the surface of their roots and absorb it into the cells. 2) True grasses, among them several grain species, release a chelator (mugineic acid, a phytosiderophore) into the soil, which complexes Fe3+, and transport this iron-phytosiderophore-complex into the root parts. Plants transport iron inside their tissues by chelators they produce.

In fertilizers, iron is bound to stabilisers or chelators like EDTA, DTPA, HEEDTA, citrate, gluconate or ascorbate to keep it dissolved and to make it available to plants.