Of all essential micronutrients, molybdenum is used in the least amount, however, the actual amount required differs from species to species. It is mainly absorbed by plants in the form of molybdate ions MoO42-. 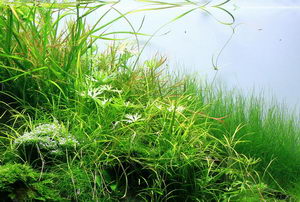 Molybdenum is the metallic component of four important plant enzymes. Together with iron, molybdenum forms part of nitrate reductase, which is decisive for nitrogen utilisation. Nitrate absorbed by the plant is reduced to nitrite by this enzyme, and furtherly to ammonium by nitrite reductase, which is in turn used in amino acids. When there is a lack of molybdenum, nitrate can accumulate in middle-aged to old leaves that first turn a blueish green colour and develop chloroses later on.

The other three enzymes containing molybdenum in plants are aldehyde oxidase (plays a role in the formation of the plant hormones indole acetic acid and abscisic acid), xanthine dehydrogenase (degradation of purin) and sulphite oxidase (detoxification of sulphite through oxidation to sulfate). Symbiontic bacteria in the root nodules of the legumes fixate aereal nitrogen N2 with the help of molybdenum-based enzyme nitrogenase and make it usable for the plant.