These three elements are non-mineral nutrients. They are available for the plants in the form of gases (CO2, O2, from the air or dissolved in the water) and in the form of water (H2O) itself.

All the other macro- and micronutrients plants need are mineral nutrients. They are absorbed by the plants in the form of minerals (inorganic compounds, dissolved in the water, ions).

Life is impossible without carbon. Carbon and hydrogen form the basic structures of all organic substances. The carbon in plants basically comes from carbon dioxide (CO2) the plants take up out of the air by emerged or floating leaves or by submerged leaves out of the water. In addition, various aquatic plants can use hydrogenous carbonate ions (HCO3-) as a source of carbon. Thus, a CO2 supply is vital for aquarium plants, we will go into detail on that later on. 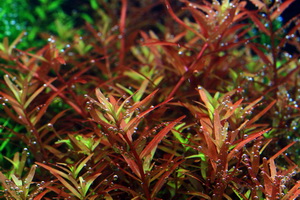 Oxygen is also a basic element of many organic compounds and is moreover needed as electron acceptor for energy generation through aerobic respiration, which in turn releases CO2. The oxygen built into organic compounds comes from the CO2 the plant has absorbed, as does the carbon. For respiration, gaseous oxygen (O2) is taken up from the air or the water, a part of which may be the oxygen released during photosynthesis. Plant roots need oxygen for respiration, and if they are deprived of it they cannot perform their tasks and finally die off. This makes a good substrate aeration a prerequisite for terrestrial plants and explains why waterlogged soils are detrimental. Many terrestrial plants do well in hydroculture, where their roots are submerged in water respectively a nutritive solution - however, there has to be a sufficiently high level of dissolved oxygen. In nature, though, the roots, rhizomes or tubers of swamp plants and aquatic plants usually grow in substrates containing very little oxygen, e.g. in sludge that is not permeated by oxygen-rich water. Thus the plants transport oxygen to their roots and other subterranean organs by a system of air canals (the aerenchyma), thus making sure they are provided with sufficient oxygen for respiration. Swamp and aquatic plants can even emit oxygen through their roots, enriching the surrounding substrate. This oxidates poisonous hydrgen sulfide (H2S).