Manganese is absorbed by plants as Mn2+ cation and can also be bound by chelators. Its functions within the plant mostly have something to do with its high redox potential and with its ability to easily change between bivalence and trivalence (Mn2+, Mn3+), very much like iron. It is a co-factor or forms part of many enzymes that are e.g. needed in the cictric acid cycle, the process of water splitting and the transport of electrons during photosynthesis or during nitrogen assimilation (enzyme nitrate reductase). As it also plays a role in the formation of aromatic amino acids phenylalanine and tyrosine and thus of phenolic acids and alcohols, manganese is also important for repelling infectants (fungi et.al.). Furtherly, manganese is needed for the synthesis of chlorophyll and for protecting chloroplast tissue from free radicals. Thus, chlorophyll production decreases when there is a lack of manganese, and the protein cover that protects the chlorophyll is destroyed. The plant then shows a chlorosis, comparable to the symptoms for iron deficiencies. Moreover, shoots and roots show an overall lower growth rate. 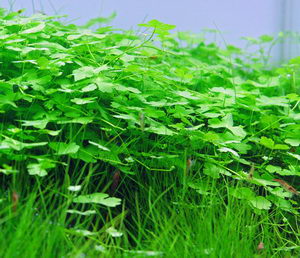 Terrestrial plants can absorb more manganese, like other trace metals, when the pH in the soil is lower. Liming the soil thus may lead to a manganese deficiency. High levels of iron, copper or zinc in the soil might also hinder the uptake of manganese.

Not much is known about how much manganese is required by sumerged aquatic plants, and how the symptoms of a manganese deficiency look. Iron seems to have been the only trace element that aquaristics has focussed on.