Magnesium is dissolved in water as magnesium cation (Mg2+) and is absorbed by the plants in this form. 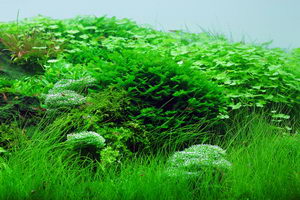 This metal plays a decisive role in photosynthesis. Magnesium is the central atom of the chlorophyll molecule, very much like the iron atom in the rather similarly structured haemoglobine (red bood pigment). Magnesium also fulfills many other functions in the organism of plants, e.g. in the activation of enzymes, the formation of proteins, DNA and RNA, carbohydrates, fats and vitamins, in phospate transportation, the carbohydrate metabolism and the transmission of energy. Inside a plant, magnesium is most highly concentrated in the areas where the plant grows. Calcium, though chemically rather similar, is most highly concentrated in the oldest parts of a plant. Magnesium is relatively mobile within plants.

The symptoms of a magnesium deficiency can look similar to those of iron deficiency, e.g. the leaf tissue pales between the leaf veins, which remain green. However, a chlorosis caused by an iron deficiency first shows in the youngest leaves, and a lack of magnesium usually first affects the older leaves.

An aquarium plant may not need much magnesium, however, even that small amount is often neglected. Not much is known about the effects of magnesium in specific plant species at low or high carbonate hardness levels, or how high the magnesium concentration may rise without toxic side effects. On the other hand, plant problems are often attributed to magnesium, calcium or potassium deficiencies, however, one should always make sure if the nitrate and CO2 levels of the water are sufficient first.

Together with calcium and other alkaline earth metals, Mg2+ contributes to the total hardness of the water. Many naturals waterbodies contain far more magnesium than required by the plants. Quite often, tap water also contains certain amounts of magnesium, and regular water changes suffice for providing the plants with it. However, sometimes almost all the total hardness is formed by calcium ions, and then the plants might suffer from a lack of magnesium even though the GH is over 5°. In literature, the ?ideal? calcium-magnesium ratio for plants is often given as 3:1 to 4:1.

If you suspect a magnesium deficiency in your plants, add a small amount of magnesium sulfate (MgSO4·7H2O), e.g. a quarter teaspoon per week. A positive effect on the plants should be visible within a week or so.