The Foreground of an Aquascape

The foreground of an aquascape plays a decisive role. It draws the eye into the tank, forms a smooth transition to the middle ground and the back and, in addition, enhances the feeling of depth in the tank. Quite often so-called ground-covering plants are used in this zone, however, some non-planted areas to accentuate the free spaces in the tank may add greatly to the layout. There are many suitable ground-covering plants for the foreground, some of them spreading by runners or stolons, some of them short stem plants running atop the ground. Glossostigma elatinoides for example, in short called just "Glosso", is a very popular stolon-forming ground cover. Its shoots are individually planted in the substrate and form a green carpet in a relatively short time. Another of the prevalent ground covers is Hemianthus callitrichoides, counted among the stem plants. It spreads more slowly than Glossostigma, but forms very dense cushions on the ground. Hemianthus callitrichoides "Cuba" (often shortened to "HCC") comes in pots and is best divided into small parts, which are planted in the substrate. 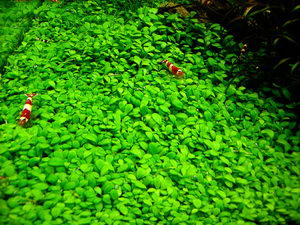 Snails, catfish and Amano shrimp just love unearthing these plants and have brought many an aquascaper to the verge of despair. We recommend that you wait until the plants have taken root before you stock the tank with animals.

As a rule, all ground covers have to be trimmed from time to time. A sharp pair of scissors is suitable for this kind of work. Cut boldly. Even though the plants may look rather barren after trimming, they will soon sprout again and bring you back a healthy green aquarium carpet.

Of course, there are many more attractive alternatives for planting the foreground, and, depending on your layout, different plants are suitable. A grasslike plant like Eleocharis parvula might also look good ? there really are no limits for plant choice in the individual areas. You can even integrate stem plants with a taller growth into foreground layouts if you trim them regularly, or if you choose an altogether different approach. In our chapter "Basic Forms in Aquascaping" we describe what the use of tall plants in the foreground of a tank may do for the overall perspective. Basically, anything is admissible that enables you to create an attractive aquarium.

After all, a green carpet formed by plants is not a must in an aquascape. Depending on the layout, unplanted sandy areas with some smaller rocks may look even more attractive than a fully green foreground. The colour and the structure of the sand creates a strong, exciting contrast to the rest of the layout. It is important though to make a smooth transition from sandy to planted areas. Tall stem plants bordering directly on the sandy zones usually look very unattractive. It is more pleasing to the eye if you use plants that stay smaller first in order to create a smooth transition to the middle ground. Decorative materials like rocks or driftwood can look good in this transitional area. There are no limits to the aquascaper's imagination, however, an agreeable design should always be considered a priority. Too many different plant species or decorative materials tend to make the design inharmonious and do not always fit into the overall layout. Sometimes, less is considerably more. 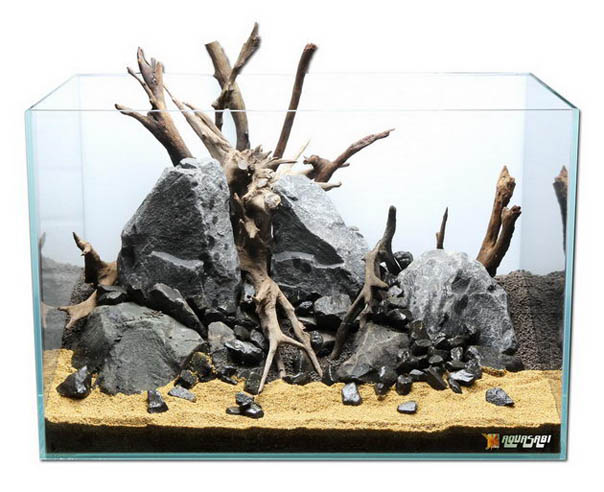 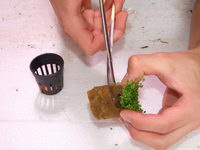 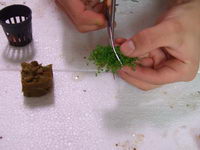 Remove the plants from their pots for planting. Cut the stone wool shortly below the green parts. The roots remain in the stone wool, do not try to remove it. Cut the plant in four and plant separately. The little stone wool that remains under the plant is not a problem for your aquarium. 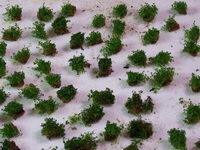 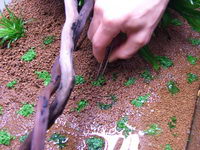 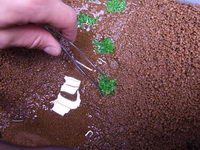 To give you a good start, you need sufficient plants from the beginning (around 80% of the overall tank should be planted). Ground covers like Hemianthus callitrichoides "Cuba" are divided in small portions that are planted at a certain distance. Here we use the plants we have cut in quarters beforehand. Later on they will form a nice "lawn". A pair of pincers facilitates planting enormously. 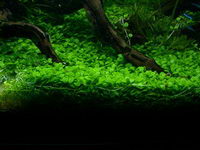 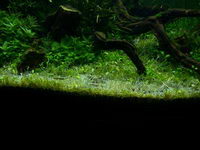 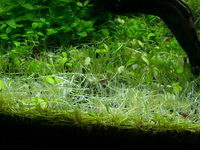 After correct trimming, Glosso is almost leafless. We mainly see white stemlets. Now you might come to the conclusion that cutting your ground cover was not such a great idea after all as it looks pretty dead now. It's hard to imagine that this mess will turn into a lush green Glosso carpet soon. 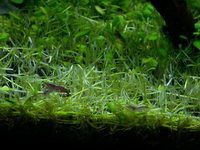 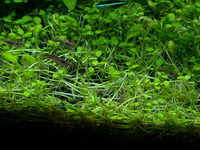 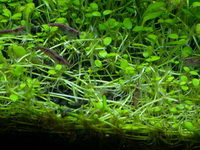 After a few days though, the Glosso begins growing at its usual speed. It keeps sprouting new leaflets, and soon the carpet is completely green and beautiful again. There is one difference, though: The leaflets grow to a far smaller size than before trimming. 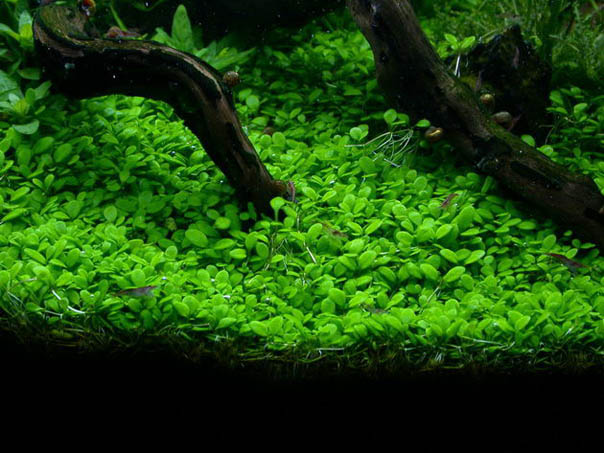 The Glosso in this picture is growing densely and looks more beautiful now. The leaflets are of an overall smaller size and render the foreground even more attractive.