Rocks in an Aquascape

Suitably-sized, nicely structured rocks evoke visions of high mountains, and the use of large rocks in a layout is thus very popular. If you choose the rocks for your aquascape carefully they are such strong eyecatchers that you hardly need other focal points in your tank. An extreme example for this kind of layout would be the so-called Iwagumi tanks, aquariums whose layout is oriented on Japanese rock gardens. The rather strict rules of rock placement that apply to the rock garden style are applied to an aquarium layout. Classically, there are three rocks, the main stone that draws the eye of the onlooker immediately, and two subordinate stones rounding off the composition. You can of course use more than just three rocks, however, the number of rocks in one focal point always has to be uneven. 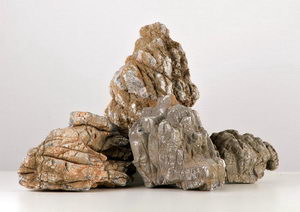 The stones should be of different sizes and belong to the same kind. Their uneven number creates a sense of harmony, and make it easier to avoid symmetries. Their more or less uniform optics round off this majestic layout style. Avoid creating straight lines in your layout when placing the stones. There are a few suitable plant species that make an Iwagumi a stone-dominated layout design. Choose low growers so the main focus remains on the rocks. Here it is also recommendable to limit oneself to only very few plant species to keep the design very calm. Quite often, only two kinds of plants are used ? a ground cover like e.g. Glossostigma elatinoides and a plant for the background that grows somewhat taller. 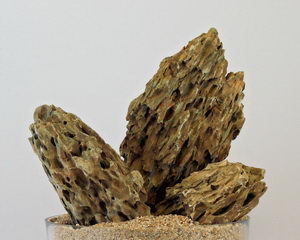 When stocking your Iwagumi tank you should keep in mind that this kind of open tank with low plants has to be suitable for the fish species you choose. A schooling fish is always preferrable. Of course, rocks cannot only be used effectively in an Iwagumi-style layout. Some aspects of this style may be used in other designs as well and can be amended with other features fitting the overall layout.