A "nature aquarium" does not primarily depict a natural underwater habitat - that's what makes the term "nature aquarium" slightly confusing in the beginning. However, a nature aquarium layout is based on a part of nature as we know it, like e.g. mountains, woods, coastal parts and such, and it depicts this scenery or evokes images of a natural landscape with aquaristic means. These layouts usually do not go too much into detail, but rather give the general impression that something we are familiar with from our surroundings is portrayed under water. The beauty of the waterplants and the decorative materials characterises the overall mood the design conveys. Its likeness with natural sceneries enhances the sense of harmony such a tank can convey to the beholder. When you look at an aquascape you can let your mind wander, see landscapes and sceneries in your imagination, and your memories of beautiful days you spent in nature come back to you. A mere depiction of an underwater biotope would hardly evoke these associations in most people, and for this reason, most aquascape layouts are based on nature around us. This style was mainly coined by Takashi Amano, who made this aquaristic art form known in all the world through his most impressive coffee table books. 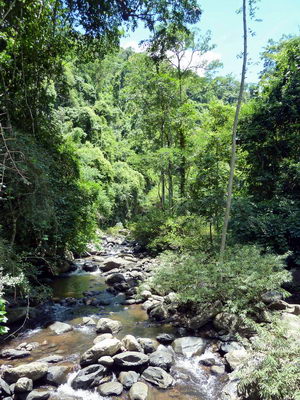 Historically speaking, Dutch tanks were the first planted tanks that had a layout and a style. Groups of stem plants create underwater sceneries characterised by a very western aesthetical sense. Quite often, they remind the onlooker of thoroughly set-up and well-structured shrub gardens. The manifold forms, colours and textures of the aquatic plants used in such a tank, the contours of the plant groups and the typical division into fore-, middle and background create a contrasting and diversified scenery. Typically, Dutch tanks are accentuated by the plants used in the layout. On the other hand, the nature aquarium style, based on the sense of aesthetics prevalent in eastern Asia, uses more than just waterplants for a layout. Here, the all-important element is the hardscape that gives the tank its mood and characterises the layout. "Hardscape" consists of decorative elements we all know - driftwood and rocks. They are used for the basic layout of a nature aquarium, in combination with suitable aquatic plants. Dutch tank, nature aquarium or a crossover of these two styles - all of them are grouped under the umbrella term "aquascape". Setting up an attractive-looking tank is what it is all about, and the style is limited only by the creator's imagination.