Phosphorus comes in many organic and inorganic forms and is absorbed by plants in the form of phosphate (PO43-), or, more exactly speaking, of the dihydrogenous phosphate ion (H2PO4-) and the hydrogenous phosphate ion (HPO42-). Phosphorus plays a decisive role in the metabolism of all living things - it regulates the intracellular energy balance (energy carrier adenosintriphosphate, ATP) and biological cellular processes by phosphorylating proteins, and it is a part of nucleic acids (DNA, RNA) and the cellular membrane (phospholipids). 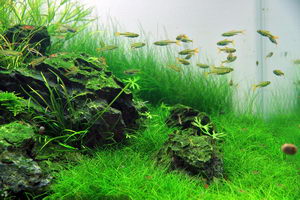 In the aquarium, phosphate is released by degrading waste, food and plant rests. In tanks with vigorous plant growth and a low number of fish that are sparingly fed, these phosphate sources are often insufficient, and inorganic phosphate has to be added (salts like monopotassiumphosphate, KH2PO4).

Phosphate plays a key role in many terrestrial and aquatic biotopes in nature, as it is often the minimum in relation to other macronutrients. Thus the amount of phosphate available is decisive for how much biomass is produced. Especially in soils with a high pH it is present in the form of compounds like calciumphosphate that are almost insoluble. Aquatic plants have adapted to absorbing sufficient amounts of short-in-supply phosphate. For example, they have no or only a very thin cuticula, an external protective layer on the cell walls, limiting water loss in terrestrial plants. This enables aquatic plants to take up phosphate and other nutrients directly with their leaves very efficiently.

For tankkeepers, phosphate is probably the most disputed nutrient, and the discussion has led to much confusion and disarray. Examinations of natural waterbodies have shown that phosphate immissions through agricultural fertilizers and phosphate-containing detergents are the main reason why water bodies eutrophy (are overfertilized by nutrient accumulation). This leads to algae blooms, among others, and to a decrease of the number of higher plants (macrophytes) as they are overgrown and outcompeted by algae. This makes many tankkeepers assume that algae can be reduced by a limited phosphate supply in the aquarium. This is not the case, however./p>

When drawing conclusions from studies on water bodies, please keep the following in mind: 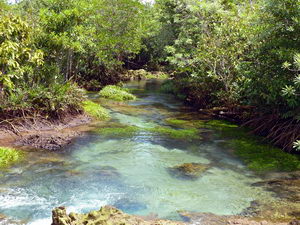 These subtropical, shallow waters without any growth pause during the wintertime are more similar to our aquariums than many lakes in northern latitudes, where most of the studies were carried out.

Now what does that mean for our tanks? In fishtanks with only one or two plants, high phosphate and nitrate levels will almost inevitably lead to excessive algal growth. However, if you stock a tank with as many plants as possible from the beginning, the fear of phosphate is unreasonable.

Fertilization with limited phosphate can be a method to limit the growth of aquarium plants, though. We will go into detail on that later.