Stabilising Nutrients in an Aquarium

Some metallic micronutrients are hard to keep dissolved in water, the most important of them is iron. The majority of iron(III) ions (Fe3+) are felled as almost insoluble compounds (iron hydroxides, iron phosphates) under the conditions in a tank, and are as such no longer usable by waterplants. In order to prevent them from this reaction, iron has to be stabilised in fertilizer solutions. 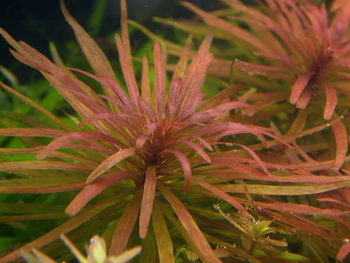 The stabilisers used for this purpose are different organic compounds belonging to the group of chelators. Every chelating molecule binds to one single metallic ion. There is more than just one binding site for the metal, and the complex resulting from this process is especially stable. The metallic ion is literally clamped by the chelator (deriving from the Greek word chelé, "crayfish claw") and thus becomes the central atom of the complex. Such a complex compound consisting of chelator and central atom is called a chelate. Chelated metal is well-soluble in water, however, its reactivity is reduced.

The bindings of metallic ions to chelators are of different strength, depending on the chelator and the metal, which is expressed by the stability constants for the specific chelates. Furtherly, the stability of chelates depends on the pH, for example, EDTA is effective at a pH of up to 6, and DTPA up to a pH of 7.5. These organic compounds degrade more or less rapidly under the influence of blue and UV light and may also be broken down by microbes.

Chelate complexes of different stability can be used for various purposes. Iron chelates formed by ascorbic acid, citric acid and gluconic acid (iron ascorbate, iron citrate, iron gluconate) release iron quickly and are thus suited for the use in fast-acting daily fertilizer. More stable iron chelates formed by EDTA, DTPA and HEDTA release the iron little by little and make it available to plants over a longer period of time. These chelators are used in fertilizers that are added weekly.