For plants, besides light and carbon dioxide, nitrogen is the most important prerequisite for healthy growth, and it is the element they need the highest amounts of right next to carbon (in the form of CO2). A nitrogen deficit infringes their growth more than a phosphate deficite, and thus is frequently the reason for algae problems due to the higher plants? stunted growth. 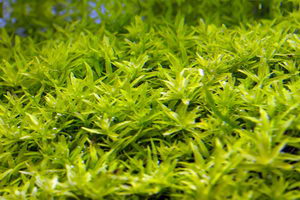 Plants use nitrogen for a variety of organic compounds. For example, it is a part of all amino acids. These are the basic components of proteins - without which no life would be possible. Nitrogen is also crucial to the formation of nucleic acids, chorophyll and plant hormones.

With 78%, gaseous nitrogen (N2) is the main component of air, however, plants cannot use it in this form. The most important forms of nitrogen usable by plants are nitrate (NO3-) and ammonium (NH4+), moreover they can make use of urea (CH4N2O). The nitrogen cycle plays an important role in terrestrial and aquatic ecosystems. This cycle describes the conversion of organically bound nitrogen, urea, ammonium, ammonia, nitrite, nitrate to gaseous nitrogen, partially performed by bacterial activity. In the aquarium, rests of animal food and plant parts degrade and release ammonium, as do animal wastes. Various bacteria convert it to nitrite and nitrite to nitrate. These organic nitrogen sources, however, are frequently insufficient in tanks with low numbers of animals and strong plant growth.

There are plant species that prefer ammonium, others favour nitrate, others use both nitrogen compounds at a ration of about 1÷1. A plant has to convert nitrate to ammonium in a highly energy-intensive process to be able to use it, however, the cellular vacuoles can store nitrate ions, and they are highly transportable within the plant. Ammonium, in contrast, is never stored, but the plants assimilate it directly, or it is converted to nitrate by bacteria. At pH values above 7.5, ammonium is transformed to poisonous ammonia, and high ammonium concentrations in the water column have been proven to be the reason for strong algal growth. A fertilizer containing ammonium may work well, but has to be meticulously adapted to the biomass in the tank and thus should be left to experienced tankkeepers.

On the other hand, high levels (70 to 100 mg/l) of nitrate from inorganic sources (like e.g. potassium nitrate, KNO3) is not poisonous for many organisms in aquariums, which makes it a very simple form of nitrogen fertilization.

The amount of available nitrogen has an influence of the colour in some plant species. Lots of nitrogen is bound in chlorophyll molecules, and chlorophyll formation is hindered when there is a low level of available nitrogen. Red pigments of a plant, usually overlaid by the green chlorophyll, are more prominent then. However, this way of accentuating a tank is relatively difficult as limiting the nitrogen supply carries the great risk of inhibiting plant growth altogether.